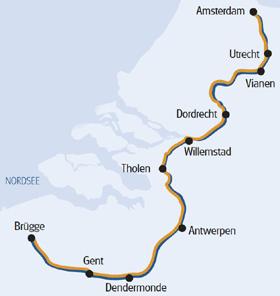 Cycling from Amsterdam to Bruges from EUR 999 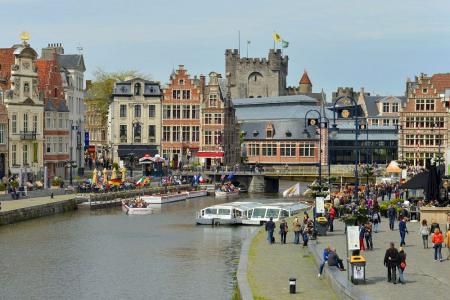 The Netherlands and Belgium aren’t particularly large; therefore a tour between Amsterdam and Bruges by Boat & Bike is easily manageable in a week. Find the similarities and differences between the reformed States General and the Catholic-Spanish Netherlands. Explore countless UNESCO world cultural heritage sites, from individual noteworthy buildings to entire townscapes. You will never be far from the water, whether in the form of canals or the North Sea, which you can access from municipal beaches. This tour in the Netherlands and Belgium on MS Lena Maria starts in Amsterdam.
Here you can find details about your boat, the MS Lena Maria.

Day 1 Arrival in Amsterdam, Boat trip
Check-in at 1 pm, then boat trip at 2 pm to the fortress town of Vianen, where you will also stay overnight.

Day 2 Bike tour Vianen - Kinderdijk, approx. 56 km/35 mi
Cycle along rivers and canals to Kinderdijk, a village which hosts a large concentration of drainage windmills, which has been declared a UNESCO world heritage site.

Day 3 Bike tour Tholen - Kreekrak, 20-36 km/12-22 mi
First you will cycle tour through one of the rare forest areas, from there through the harbour to the centre of the City of Diamonds - Antwerp.

Day 5 Bike tour Dendermonde - Ghent, approx. 52 km/32 mi
First, the river Schelde takes you through typically Flemish villages. Later on you will reach Ghent, once known for its wealth and elegance with its cathedral and magnificent town houses.

Day 6 Bike tour Moerbrugge - Bruges, 45 km/28 mi
Boat trip during breakfast, then you will cycle along the Ghent-Oostende Canal until you reach Bruges, which is also known as the ‘Venice of the North’ and is a UNESCO world cultural heritage site.

Day 7 Round trip to the North Sea, 37-48 km/23-30 mi
Today you will visit the seaside. 12 kilometres of fine sandy beaches and the nature reserve Het Zwin await you.

Day 8 Departure
After breakfast your tour in the Netherlands and Belgium on MS Lena Maria comes to an end.

Here are the details on MS Lena Maria.