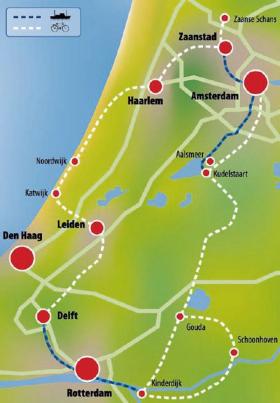 Green Heart of the Netherlands

Discover the countryside on MS Gandalf from EUR 949 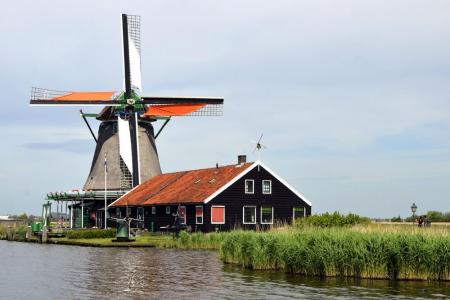 The Netherlands sure is densely populated - the sprawl of large cities, from Amsterdam to Rotterdam, from the Hague to Gouda has grown together and now surrounds Holland’s green heart - in Dutch, this is referred to as the “Randstad”. This region is shaped by agriculture and abundant nature: bodies of water, as well as farms and windmills paint an impressive picture of this country. But you’ll also get to see North Sea beaches, Rotterdam’s harbour and obviously you can’t miss the enticing, colourful city of Amsterdam.
Here are some details on the quaint and familiar ship, the MS Gandalf.

Day 2 Boat trip, Zaandam - Haarlem, 40-55 km/25-34 mi
The museum village of Zaanse Schans is well worth a visit, after which the bike tour commences, taking you to the picturesque town of Haarlem.

Day 3 Haarlem - Leiden, 42-50 km/26-31 mi
Past pristine sandy beaches, you’ll be cycling to the university town of Leiden, which is home to beautiful houses from the 17th century.

Day 4 Leiden - Delft, 37-42 km/23-26 mi
There are several tours to choose from - a visit to one of Delft’s many china factories is highly recommended.

Day 5 Boat trip, Kinderdijk - Gouda, 23-65 km/14-40 mi
Today begins with a tour of Rotterdam’s harbour, after which you’ll be cycling past the many windmills of Kinderdijk into the town famous for its cheese.

Day 8 Disembarkation and departure
Your trip "Green Heart of the Netherlands" concludes after breakfast, disembarkation until 09:30 am.

Here are the details on MS Gandalf.

Included in your package "Green Heart of the Netherlands":

Arrival to "Green Heart of the Netherlands":